Kara Mbodj was out of the Belgian media for far too long this summer. The big Anderlecht character, nicknamed King Kara, wasn’t getting the column inches he usually does, and that was a surprise.

This was supposed to be the King’s big summer, one which would see a Premier League move. Leicester City and Crystal Palace had made moves during the January transfer window, but Anderlecht stood firm.

Thursday’s Belgian newspapers carried comments from the player explaining that he could stay, and it seems pretty clear there’s so far been a lack of offers.

On Friday, Herman Van Holsbeeck, Anderlecht’s sport manager (similar to a director of football) is quoted by Het Belang van Limburg as saying: “With Kara, the agreement is that he can get leave with a good offer. At Leicester he could earn €3.5m in January. At that time we convinced him to stay, after which he was one of the key players on the way 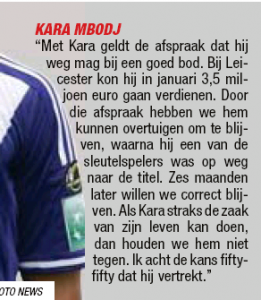 to the title. Six months later we want to stay correct. If Kara can do the business of his life then we will not stop him. I consider the chance to leave 50/50.”

There’s no suggestion of a Leicester City return for the central defender, and they may not hold the same interest any longer. However, Kara is an excellent defender and Premier League clubs have already signed worse defenders this summer for more than Mbodj would cost, the King is worth serious consideration. 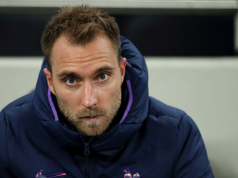