There’s something strangely comforting about a William Carvalho transfer rumour.

The midfielder, currently with Real Betis, has been involved in transfer claims for years, going back to his early days at Sporting. Endlessly linked to the Premier League, and part of a wonderfully entertaining public battle between the presidents of Sporting and West Ham, he’s ever present.

Carvalho has recently been linked to Leicester City, and Friday’s edition of A Bola follows up on those claims. The Portuguese newspaper say they’ve found out themselves that both Leicester and AS Monaco have already made contact with Betis about a summer move.

The Seville club are asking for €30m, however, it’s believed a deal at €25m is possible. Sporting would get just over €6m from that, which would be very welcome indeed. 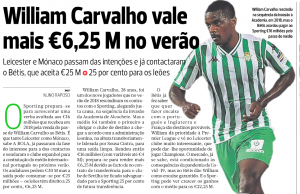 Carvalho himself is said to want a move to the Premier League, and that’s been the case for much of his career.

Such a stance from the 28 year old would clearly favour Leicester City over Monaco.