Leicester City have made an approach for Sporting fullback Nuno Mendes, according to claims from the Portuguese media on Monday.

It’s newspaper Correio da Manhã who writes it, claiming the Foxes have worked to learn the details of the 18-year-old’s contract with the Lions.

Leicester City’s main intention was to become aware of the release clause, which according to the outlet is €45m.

Correio da Manhã says the approach wasn’t made through his agent, Miguel Pinho, but through someone who has deep knowledge of Portuguese football. 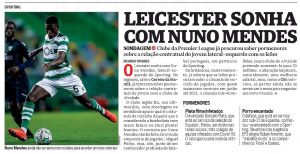 The report claims that Sporting are trying to raise Nuno Mendes’ release clause with a new contract, and also give him a pay raise. However, the negotiations haven’t kicked off so far.

Even though Correio da Manhã doesn’t mention it, Nuno Mendes has been linked both to Liverpool and Manchester United this year. Just last week, the news about his possible renewal had the two Premier League sides named in the stories, and never Leicester City, who seem to have only moved in the past few days.