Each week SportBild pick a winner and a loser of the week. There’s often an English connection, with the ‘loser’ from the Premier League more often than would be a reasonable balance.

Whilst often credited with having the loser, English football doesn’t so often get the winning spot, especially the Championship. Huddersfield Town manager David Wagner has probably got the nod once or twice, as he was taking his team to the Championship.

Leeds United will hope that’s a good omen, because this week Pierre-Michel Lasogga gets the nod. It’s hard to exaggerate the impact Lasogga’s Leeds debut has had in Germany, it’s been covered everywhere.

Lasogga is living the classic zero to hero moment, and all in the week the Leeds striker is set to become a father. 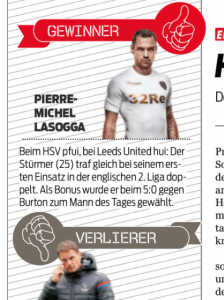 On its own this from SportBild is little, but in the scheme of Lasogga’s change of fiortunes it’s another boost.

Not so long ago Lasogga was almost a figure of mockery in Germany, pitied for his football decline, with his big contract being a sign of all that’s wrong with football. Being named SportBild’s winner of the week shows a turnaround beyond what even the most optimistic backer of the player expected.