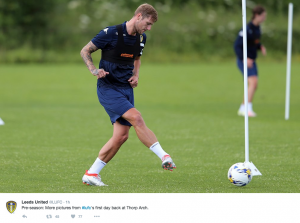 Leeds United are close to completing the deal to sign Kalmar forward Marcus Antonsson according to claims in the Swedish media.

24 Kalmar have today reported Antonsson will become a Leeds United player either today or tomorrow after undergoing his medical last week.

The Swede today trained with his new teammates ahead of his £2m move to Elland Road, and he will soon be officially revealed as a Leeds United player.

Leeds United’s official Twitter account appeared to show Antonsson in the background of a training photograph and he was soon spotted by fans, who are now just awaiting the official announcement.