Leeds United boss Marcelo Bielsa is set to appear in court next year as his legal battle with former club Lille rages on.

The Ligue 1 side sacked the Argentine coach in December 2015 after just six months in charge in an ill-fated spell with the French club.

He arrived at Lille in May that year to much fanfare, with them completely overhauling the squad in his image.

However, a series of poor results led to Bielsa being suspended in November before the club elected to sack him as they sat 18th in the table.

That should have been the end of the matter, but in 2018 Bielsa was ordered to pay Lille €300,000 in damages when a local court ruled against him in a dispute about his dismissal.

He had claimed €18.6m in ‘unfair dismissal’, but the court dismissed that as unreasonable. Undeterred, Bielsa and his team have continued to fight, and now he is set to appear in person to do so.

Bielsa’s representative, Benjamin Cabagno, had tried to ensure the hearing would happen before the end of 2020, something his colleague, Bertrand Wambeke, who is representing Lille, had agreed with.

However, this attempt was dismissed, with Cabagno later questioning the ‘impartiality’ of postponing until next year.

The two sides are then set to meet more than three years after his dismissal, with the Leeds boss still claiming between €16.5m and €18.9m according to L’Equipe. 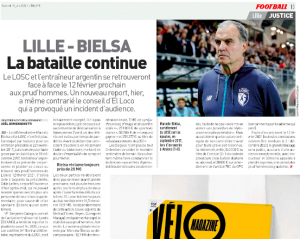 The French club, for their part, have ‘no intention’ of giving up any of that money and are even pushing for Bielsa to pay them, claiming €560,000 for ‘abusive action’ and €30,000 in court costs.