It seems that Leeds United’s pursuit for Sporting defender Tobias Figueiredo could go quite cold in the next few days.

As reported by three different Portuguese media outlets this Wednesday, the player could end up being involved in another deal for the Lions, leaving the Championship club empty handed.

Sporting have apparently reached a pre-agreement with the Rio Ave defender Marcelo Ferreira, who will join the Lisbon side in the summer, when current contract expires.

But thing is that Sporting would like to bring him to the club now, and to convince Rio Ave to anticipate this transfer, they would loan one of their players for this six-months period. 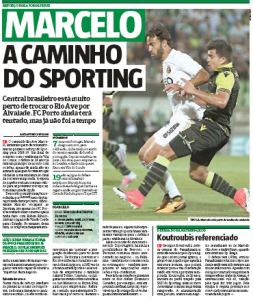 A Bola, O Jogo and Record all claim that Tobias is the one on top of the list. The defender needs more minutes to get experience, and Rio Ave would be a good chance for him.

Good thing for Leeds is that Rio Ave are being ambitious, and want a player like Iuri Medeiros or Alan Ruiz instead, according to what Record reports.

It’s also Record who claims that if another club comes up with a ‘financially advantegeous’ offer for the Tobias, then he will go somewhere else.

So it sounds like it’s Leeds who should do something if they really want to bring him to Elland Road. Leaving it for later could just give room for Sporting and Rio Ave to negotiate, and that could complicate things.