Leeds United are showing ‘concrete interest’ in Stuttgart full-back Borna Sosa this summer as they hunt a new left-back.

The Whites are expected to lose Ezgjan Alioski this summer, with his contract expiring and him heavily linked with a move to Turkey.

Should he depart Elland Road, Marcelo Bielsa’s side will need a new left-back to fill the hole he leaves behind, and Sosa has been linked with the move.

He’s been having a superb campaign with Stuttgart this year, racking up ten assists in 24 games in the Bundesliga so far.

Earlier this week, Sportske Novosti carried claims from his agent that Leeds are keen and have made a bid, with their ability to pay Stuttgart’s asking price putting them ahead of the competition. 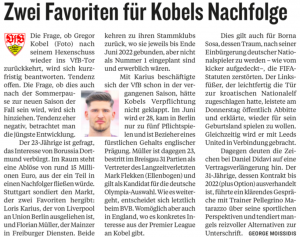 Kicker follow up on that today and say that there is ‘concrete interest’ from Leeds in a move this summer.

They don’t go any further than that, so there’s no confirmation of whether they have actually made a bid or been in contact, just that there is interest.

But the interest is certainly there, making Sosa a name to keep an eye on moving forwards, particularly if Alioski moves as expected.