Most Portuguese newspapers are coming up with the same news today: Ruben Amorim is signing a new contract with Sporting.

The manager’s current deal, which expires in 2023, is expected to be extended until 2024. And the main thing is his release clause, which is going from €20m to €30m.

Now why are the Lions giving the coach a new contract just one year after announcing his signing? That will be the interest from foreign clubs, including Leeds United.

It’s been a few days since it was reported that the Whites made an approach to get to know the conditions of his signing, as they want to have a backup option in case Marcelo Bielsa chooses to go from the club.

Now the likes of A Bola and Jornal de Notícias are back mentioning Leeds United, as well as Leicester City, as one of the reasons why Sporting are so worried about protecting the manager. 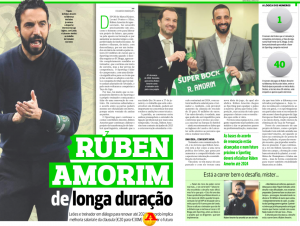 Newspaper O Jogo, who were the first to report the interest from English clubs, continue without naming who these sides were, but also relies on the information that the Lions are aware of the chase from abroad.

Ruben Amorim’s new deal with Sporting is still to be made official, but with so many outlets reporting how close the agreement is, it shouldn’t take long until it’s signed.

Now in case Leeds really feel the need of going for the manager, they should now know that he won’t be a cheap signing. Newspaper Record recalls that Chelsea also had to pay €15m to take André Villas Boas from Porto ten years ago.