Leeds United, fresh from their dramatic escape from relegation back to the Championship, are doing everything they can to ensure a repeat doesn’t happen next season.

They’ve already signed three players in Brenden Aaronson, Rasmus Kristensen and Marc Roca, and there could be a fourth (and even maybe a fifth should Raphinha be sold).

One of the players being looked at is Hamed Junior Traoré, brother of Manchester United’s Amad Diallo, currently at Sassuolo.

Signed from Empoli last summer, the 22-year-old enjoyed a successful season in Serie A, scoring seven goals and assisting another four, which has led clubs, such as Leeds and Milan, to take interest.

Gazzetta dello Sport have a big article on the latter’s interest, but mention the Elland Road side in the process.

It’s revealed that Giovanni Carnevali, Sassuolo’s chairman, ‘has seen the telephone light up several times, and the number had a foreign prefix’.

Those were ‘expressions of interest’, with some even coming from Italy (Milan), wanting to find out if Traoré was for sale, but ‘the point is that no one has gone from words to deeds’, and ‘no one apart from Leeds has pushed the deal forward’. 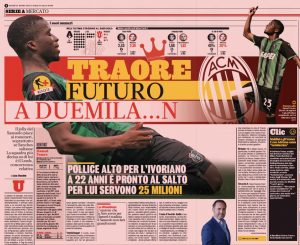 Jesse Marsch’s side ‘are the most determined at the moment’, but they’re also not a team ‘for which a player would put Milan on the unwanted list’, meaning the Serie A side would still be an option.

While the charm of the Premier League is there, Traoré ‘is unlikely to sign’ for Leeds ‘in the next few days’.

This gives Milan a chance to discuss numbers with Sassuolo, although that is a ‘negotiation that has not yet begun’.

Regarding money, the Serie A club ‘will not accept proposals in the order of €20m’, meaning that Leeds, or whoever else might want him, ‘will have to bring offers of €25m upwards, perhaps with a complex proposal’.

Therefore, Andrea Radrizzani and co. know what they have to do.