The future of Erick Pulgar at Fiorentina remains a topic of conversation in the Italian newspapers these days, and Leeds United continue to be an interested party.

That’s according to two different sources on Friday, and we’ll start with La Nazione journalist Angelo Giorgetti, who spoke to Pentasport on Radio Bruno.

Asked about the Serie A side’s current situation on the market, he made it clear Fiorentina were looking for a tactical midfielder, such as Lucas Torreira, which could lead to Erick Pulgar’s exit.

Relayed by Viola News, he said: “Sales? I think that Pulgar can leave at the right conditions, and Leeds is a concrete opportunity.” 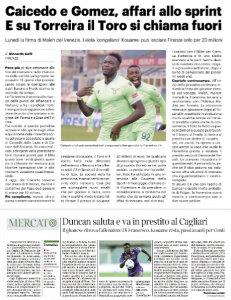 Echoing their journalist, La Nazione themselves have a little bit on the Chilean midfielder, saying his exit from the club is now ‘very probable’.

As for the rest, Corriere Fiorentino also look at their local team’s transfer market, adding that ‘only after the position of Pulgar (who is liked by Leeds) is cleared will they value the insertion of a more technical midfielder’.

It’s either one way or another, but if Fiorentina do take Lucas Torreira from Atlético Madrid (and Arsenal), then Elland Road could welcome a new addition to Marcelo Bielsa’s squad.