Earlier on Thursday, we covered news from Italy that Southampton were keeping an eye on young Italian striker Lorenza Lucca.

That Saints, who have struggled to find the back of the net a bit this season, sent a scout to watch the 21-year-old, currently enjoying life to the fullest at Pisa in Serie B.

Arriving from Palermo for a fee of just under £2m, Lucca has already scored six goals in seven league games for his new club, as well as helping out with an assist.

This has led to a lot of attention from other Italian sides, with European teams also starting to joining, exemplified by Southampton’s trip for him, where they were joined by RB Leipzig.

Pisa, aware of all this, are ‘making every effort to protect their star’, according to Corriere Fiorentino, while his market value ‘continues to grow’. 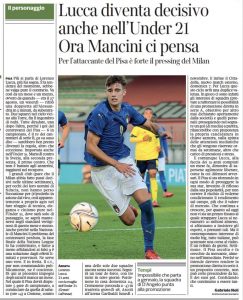 Right now, there is ‘no fixed price’ for the Southampton target, but the presumed amount is ‘at least €10m’.

However, with so many big clubs in Italy after him, Milan being one of them, added to the Saints and Leipzig, that could grow, and Pisa, as things stand, ‘listen and turn a deaf ear’.

That being said, we all know money talks, especially Premier League money, meaning that if Ralph Hasenhüttl sees something he really likes in Lucca and wants him in January, then perhaps an effort on the club’s part to satisfy their manager could be made, helping the Serie B club make a quick profit in the process.