On June 28th, we covered multiple reports from Spain and Italy that explained Junior Firpo’s move to Leeds United is imminent.

Calciomercato were among them and they reported the Barcelona defender’s move to Elland Road is expected to be closed in the ‘next few hours’.

Mundo Deportivo on Tuesday once again state the left-back is close to joining the Whites for a fee between €15m and €17m.

AC Milan were the first to arrive on the scene for the left-back, but they were hoping to take him on a loan deal with a purchase option.

Leeds’ ‘forceful irruption’, led by Victor Orta, has ‘changed the script’ as Marcelo Bielsa’s side have overtaken competition from Milan and other English clubs for the former Real Betis star.

Mundo Deportivo say that after finishing the last campaign in ninth spot, Orta isn’t satisfied with what the English club have achieved and wants to go further. 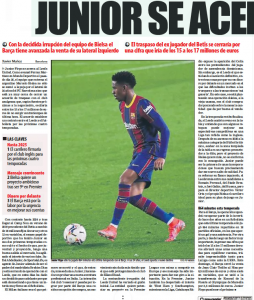 Leeds ‘want more’ and that can be achieved by bringing in new reinforcements this summer.

Mundo state Junior’s imminent arrival would be the ‘first of a few’ signings for Leeds as they ‘seek precisely to take that new leap in quality’.

Junior is expected to sign a four or five year contract and a move to Leeds is likely to improve his chances of playing regular football next season.