In April, Sport Witness covered claims from Le Parisien about QSI, PSG’s owners, looking to take over a Championship club.

Nottingham Forest, QPR and Aston Villa were named as potential options, and Leeds United didn’t get a mention. Despite Le Parisien leaving the Whites out, we made it clear they looked an obvious option given links through Aspire and Andrea Radrizzani.

And so it came to pass, with countless reports since talking about a potential takeover.

There were even claims over the past week that things are getting closer.

Le Parisien suggest there’d be issues with the three being in the same household. Qatar is said to be in discussions with Leeds United, yet it’s pointed out this could all present problems for PSG down the road.

Nasser Al-Khelaïfi, the French club’s president, is described as playing a ‘central role’ in the talks which have been ongoing for months.

Referring to English claims that negotiations are on the right track, Le Parisien adds: ‘Other sources tell us that the file is moving forward but that the parties are still far from an agreement on the purchase price. The club is currently owned by businessman Andrea Radrizzani, who bought it in 2017 for 45 million euros (M €) and makes important requests.’

Disagreement over price is at least partly related to what division Leeds United would be in next season. Get promotion to the Premier League and they’re automatically a much more valuable club.

QSI have been studying other options, with clubs in Italy a possibility, but just like the Naples media, the French source dismisses recent claims of an attempt for Napoli.

Given the restrictions on owning two clubs in the same competition (with UEFA tournaments the worry here), there’s some reflection going on in Qatar about what they really want to do, and Le Parisien say there are three main options: ‘The first is to buy only a portion of the shares of Leeds, but this is very unlikely, since Qatar intends to manage his new jewel alone if they take control. The second would be not to invest as much in Leeds as in Paris, first seeking an economic profitability much easier to find in England than in France. An option that finds its limit in the geopolitical ambitions of Qatar, whose leaders feed a permanent competition with the United Arab Emirates, owners of Manchester City. The last possibility is for Qatar to complete both projects head on, until Leeds is big enough for the issue of a Champions League qualification to become a reality.’

Should QSI purchase Leeds United and genuinely go for it, Champions League or Europa League qualification would mean only one of the clubs could take part in European competition, and Le Parisien states: ‘Concretely, if they remain champion of France, PSG 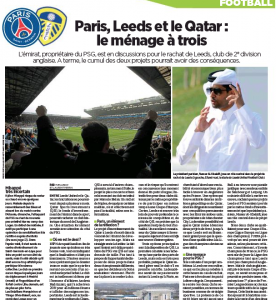 will be sure to play the Champions League until Leeds is champion of England. But the English club would be deprived of any European competition, which would be boring and could happen quickly, since 7th place in the Premier League gives access to the qualifying rounds of the Europa League.’

The suggestion there seems to be, and the implied worry for PSG, is that eventually the French club’s position in Europe could come under threat.

It’s all this that QSI are pondering, and the insinuation is that until it’s resolved nothing can move forward, even if a price could be agreed.