Barcelona have two victories and a draw to their name in La Liga so far this season, which isn’t a terrible start, especially when the summer drama around the club is considered.

On Tuesday evening, the Catalan club lost 3-0 to Bayern Munich, a result which wasn’t unexpected. Despite that, it’s thrown Barcelona into further chaos, with widespread claims that Ronald Koeman’s future is under serious doubt.

The Dutchman wasn’t Laporta’s choice as manager so there were always going to be questions about whether the incoming president would quickly show him the door.

Following the defeat to Bayern Munich, a meeting was held among the club’s leaders and it was decided to hold back on pulling the trigger… for now at least.

Thursday’s edition of Sport reports Laporta is ‘very annoyed’ with his manager, and lays the blame for the performance at Koeman’s door. His anger is ‘monumental’ with the 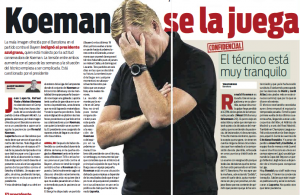 coach, because he sees him as the ‘main culprit’ for Barcelona seeming like a ‘small team’.

Therefore, a timeframe has been set for a decision to be made.

Koeman will be given the upcoming matches against Granada, Cadiz and Levante, and if he fails to impress then it sounds like he’ll be edged towards the exit.

“I hope Conte goes to Newcastle” – Italian journalist has preference for manager, and explains why

“I had little patience” – Player hints at regret over pushing...

“I hope Conte goes to Newcastle” – Italian journalist has preference...