If Barcelona’s plan with Eric Garcia has been to get revenge on the defender for the way he left them for Manchester City, then they’re going about things the right way.

The defender was thought to be close to moving to the Camp Nou in the last summer window, however, City didn’t want to sell for a cut-price fee and Barcelona didn’t want to match what the Premier League club were asking for.

Much was the same in the winter market, as Barcelona, without knowing their new president at the time, didn’t feel it was appropriate to go through with a deal.

When Joan Laporta won the elections it was considered a matter of time before Barcelona announced Garcia’s arrival. There were various claims in the Catalan media that a deal had been agreed and would be announced before the end of the season, now that doesn’t seem to be the case.

Mundo Deportivo report Laporta’s camp have made their first offer for the soon-to-be free agent. That offer is at figures less than Garcua had agreed with Barcelona’s previous board. 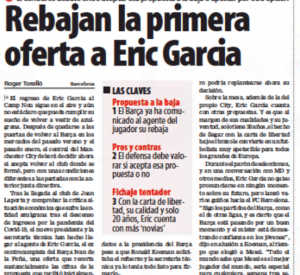 Indeed, Mundo say Laporta’s first offer is ‘significantly’ lower than what had been proposed before. Garcia’s reaction to this will be key, and the next few days and following weeks are crucial in that regard.