Home Europe ‘Lack of liquidity’ – Wolves slipping out of signing picture due to...
SHARE

O Jogo have a big Thursday article on Matheus Nunes, but this time it doesn’t focus on Wolves.

There’d been claims this week from Portugal stating Bruno Lage absolutely wants the midfielder, as well as his Sporting teammate Palhinha. It was even stated Nunes himself would be keen on the move to Wolves.

O Jogo throw some cold water on all of that, with them concentrating on Everton interest. Newcastle United are also briefly mentioned, and when it comes to Wolves it’s explained finances look to be a problem.

The newspaper states that as things stand, Wolves have a ‘lack of liquidity’ and would struggle to pay the €50m Sporting are said to be looking for. Therefore, Lage’s side are ‘losing the race’ for Nunes.

It is said they’re ‘close to securing’ Palhinha, but other Portuguese newspapers today talk up Fulham competition again. 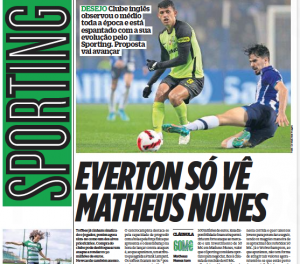 Whatever is holding up Wolves’ Palhinha move, be that Ruben Neves or not, it needs to get sorted out quickly so Lage doesn’t miss out on two midfield targets.

Nunes was always going to be a harder deal to do, but Palhinha seems to be ready and waiting at around €20m.