Joaquín came up through the ranks of Real Betis’ youth system and after spending six years with their first team, he left them for Valencia in 2006.

After spending the next nine seasons elsewhere, the forward returned to his boyhood club in 2015. Chelsea were interested in acquiring his services during his first spell with the Spanish club.

During José Mourinho’s first cycle at Stamford Bridge, the Portuguese tactician was keen on bringing the 38-year-old to England.

Both clubs were willing to go ahead with the deal, but the transfer never materialised because of the player.

Spanish newspaper AS interviewed Joaquín and asked him why he turned down both Mourinho and the Blues.

Responding to that, he said: “First, because I didn’t want to leave Betis. A week before we had played at the Bernabéu against England, I had a great match and José was there, he was interested.

“A few days later I recorded an advertisement in Madrid and when I returned on the AVE [high-speed rail], my father tells me that Mourinho is in Seville, waiting for me at Alfonso XIII.

“And I’m on the train thinking about England, the weather, the language… I made a cocoa and when I arrived, I told to my father: ‘Dad, I’m not going’. Anyway, he’s going to convince me, I thought.

“And I did not go. The next day Mourinho returned and [Manuel Ruiz de] Lopera [former Real Betis chairman] told me that I had to sell myself for the future of the club. I answered no.” 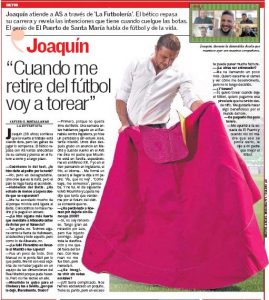 There’s no mention at what stage Mourinho wanted Joaquín.

The match against England at Bernabéu, which the Spaniard mentioned, took place in November 2004.

It’s likely the then manager of west London club wanted to sign the attacker for Chelsea in January 2005.