Things are looking up for Ronald Koeman, as the optimism around Barcelona has managed to also reach the pitch.

Not so long ago a La Liga challenge looked very difficult indeed, but now there’s increased hope that Barca really have a chance to snatch the title out of Atletico Madrid’s clutches.

There’s also optimism ahead of the summer window, with Joan Laporta clearly wanting to oversee an exciting new era at the Camp Nou, even if the reality of the club’s poor financial situation hangs like a cloud over everything.

Wednesday’s edition of Mundo Deportivo reports Koeman is set to have a meeting with Laporta soon, at which he’ll make his five market requests.

Firstly, he wants both Lionel Messi and Ousmane Dembele to have their contracts renewed, and be a major part of the way forward.

For central defence, Eric Garcia is the chosen one, and is expected to arrive from Manchester City on a free transfer.

Then, the left-back situation needs sorting out. A move for David Alaba is largely ruled out, although Koeman is waiting to hear about chats between Laporta and the Austrian’s agent. Should there be no reasonable priced option on the market, the manager will look within the club. 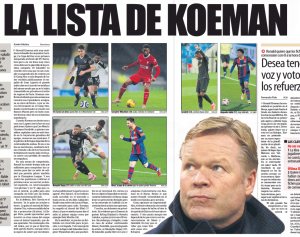 In the middle, Georginio Wijnaldum is the major option, although it’s again made clear there’s no agreement yet.

For his attack, Koeman is keen on Erling Haaland and Romelu Lukaku, although he’s aware that’s unlikely so, especially if Messi stays, the obvious option becomes Memphis Depay, who just like Garcia, would be on a free transfer basis.