Home Pick of the Week “We need to invest” – Jokanovic speaks in Spain on Fulham, plenty...
SHARE

Slavisa Jokanovic is about to get his chance to manage in the Premier League.

Having previously achieved promotion with Watford, the manager was victim to the club’s conveyor belt approach and didn’t stay around long enough to enjoy the result of his work.

Jokanovic is well respected around Europe and in Spain he’s known for playing for several clubs in the country, and also a very brief spell as a caretaker manager at Hercules.

Marca have managed to get themselves an interview the Fulham manager and it’s clear he’s wanting as much as possible out of the transfer window.

Asked what people can expect from Fulham in the Premier League, Jokanovic replied: “It’s another level and we have to be prepared. The transfer market is an important period to bring in the pieces we need.”

Then asked whether there’ll be a revolution at the London club, the manager said: “No. We have a good player base, but we know that we have to invest in experienced people to give them support and be competitive in the Premier League.”

After making his transfer intentions clear, Marca wanted to know about Ryan Sessegnon, and simply asked if the youngster will continue at Fulham: “Yes, there is a lot of interest in him, but I think he’s going to stay. The club is not going to put him on the market. He is happy to stay another season with us and I think it’s good that he’s not in a hurry.

“He has just turned 18 and has already played almost 100 games in the second division… If he stays and plays with Fulham in Premier League he will be even better prepared to make the jump to one of the best teams in Europe.

“He is an incredible player project, with a fantastic physical capacity. People compare him to Bale, for me it’s a mix between Marcelo and Bale. I’ve used him lately in a more offensive role, but he’s ready to be left-back of a big team that constantly attacks. He still has a lot of room for improvement.” 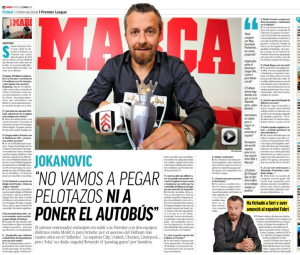 Asked about what Aleksandar Mitrovic added to Fulham, Jokanovic said: “Very much. He played 20 games and scored 12 goals, but he also worked a lot in defence, helped us in strategy, playing with his back to goal… He has been a key player. We’ll see if we can count on him again.”

On his own transfer links, having been mentioned as a potential Chelsea boss before Maurizio Sarri became the chosen man, Fulham’s boss took it in his stride: “It is part of this world. That other clubs look at our work is positive… but you have to take it easy.”