Two months ago, Het Nieuwsblad reported Swansea City’s interest in Thomas Henry is ‘more concrete’, but the striker wanted to wait and find out if more clubs will come forward to sign him this summer.

That’s exactly what has happened now, as Het Nieuwsblad say Celtic have ‘knocked on the door’ of the OH Leuven star.

The 26-year-old, who ‘flirted’ with Beşiktaş in the winter market, has an agreement in place with the Belgian club’s board that he can leave Leuven if there’s an offer that’s beneficial to both parties.

It’s been stated the Frenchman’s valuation is around €5m, but Celtic, who are ready to push for his signing, ‘want to go a step further’. The report’s title states the Bhoys ‘want to pay more than €7m’ for Henry.

Leuven signed the frontman for €500,000 in 2019 and the latest figures mentioned will see the club earn ‘more than tenfold’ from the player’s sale. 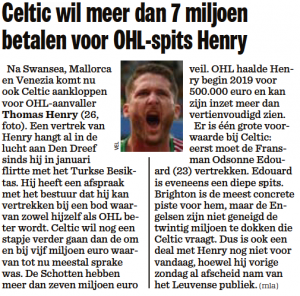 ‘There is one big condition’ for Celtic to sign Henry; they must first sell Odsonne Edouard.

Brighton & Hove Albion are interested in Edouard, but aren’t willing to meet the €20m fee demanded by the Scottish side.

Therefore, Celtic’s deal for Henry, who has already said goodbye to Leuven, hasn’t been concluded yet.