With the departure of Georginio Wijnaldum in the summer becoming more and more likely by the week, Liverpool are understandably trying to get ahead of the game by finding a replacement.

A bunch of names have been mentioned, among which is Rodrigo De Paul, currently at Udinese.

The Argentinian midfielder was a target for Leeds United in the summer, but the Serie A side’s asking price put them off, and that could end up being the same for the Reds.

According to Corriere dello Sport, most likely picking up the news in England, they explain the 26-year-old is ‘targeted’ by Jürgen Klopp, but €40m ‘may not be enough’.

Despite claims of talks being underway, it’s explained ‘an official move’ from Liverpool will be needed to ‘try and force the hand’. 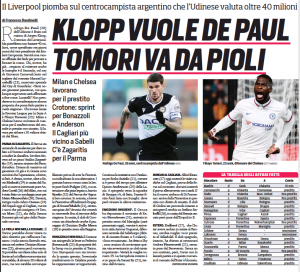 This suggests talks of a €40m+ deal might just be hot air from the Udinese side, but until they’re given something to seriously consider, like a €35m bid, they’re free to talk as much as they want.

Will it be the same narrative when presented with a lot of money? Corriere dello Sport aren’t so sure.