Liverpool are in a slightly brighter period right now than they were not so long ago. Victories against RB Leipzig and Wolves have lifted the clouds a little.

It’s a lengthy interview and Klopp has been candid about Liverpool’s problems so far this season. Currently sixth in the Premier League, the Reds have seen their title challenge evaporate as rivals Manchester City race towards the trophy.

There’s still a reasonable chance of qualifying for the Champions League, given the club are only five points behind Chelsea in fifth place, but Klopp isn’t at all confident in that regard.

Matthaus asked the manager about Liverpool’s chances in the final stages of the European competition, and he responded: “Getting through was important for the whole club, but especially for us as a team. The game reflected the way we went through the season a bit: We are still not a bad team, we just often don’t finish our actions successfully. That is what makes the maximum difference in football.

“The opponent usually doesn’t need a lot of chances against us because we make big mistakes, insane ones that can almost be described as slapstick. On the other hand, we create a lot of chances, in the “expected goals” we are still second behind Man City in the Premier League, but far from them in the ones we actually scored. This problem has been going on throughout the season.”

The Liverpool manager went on to say that whilst he’s not ruling out success in the European competition, it’s only realistic to win the trophy with a full strength squad, something he hasn’t had the fortune of this season.

Matthaus pressed Klopp on what it would mean to miss out on the Champions League, and he insisted it may not be such a bad thing, even if Liverpool fail to get European football of any kind: “It would mean a huge financial loss. Otherwise not that much. I am aware: In almost all football clubs in the world, I would be questioned in a situation like our current one. This is completely normal, reality, the business. I would accept that immediately. But it’s different here in Liverpool. Our owners, the sports director, even the players: nobody doubts anyone here. We have accepted the situation for ourselves and fight our way through it. 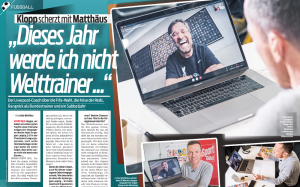 “Even if there has never been anything like it after a championship: Then we’ll be the first to fight our way, as a large, successful club. We won’t let a leaf get between us. That is the plan. Then in the worst case it will be next year: no Champions League, maybe Europa League, although that is not guaranteed either. If we don’t play internationally at all, that means: more time to relax. That would be bad for all other teams. Because training is good for us. If we had more time, we could take advantage of it. We would try to turn the bad situation into something good.”

Liverpool supporters will be hoping Klopp is wrong and that those five points separating them from fifth place can be made up between now and the end of the season.