If you were to draw up a partnership at centre-back set to dominate a physical league like the Premier League, you would immediately have Virgil Van Dijk in there.

That’s simply a given, as the Liverpool defender is the best in the world in his role, and has been a key member of Jürgen Klopp’s squad over the past few years as they have grown to eventually dominate football on these shores.

As for his partner, however, it’s tricky, as you would want someone to complement his strengths while also helping him cover up whatever slim weaknesses he may have.

Well, Klopp appears to think Kalidou Koulibaly would be the right man for the job, as the Senegal international keeps getting linked with a move to Anfield.

The latest comes from Corriere dello Sport, who write on Wednesday that the German manager ‘likes him so much’ that he ‘dreams of matching him up’ with Van Dijk. 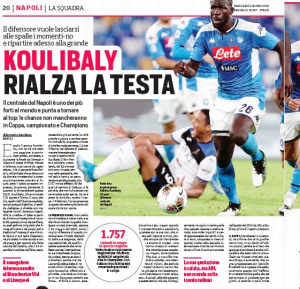 Furthermore, Anfield ‘has an appeal that captures the attention at least as much as Old Trafford’, so that’s an extra bonus for Liverpool if working with Klopp and playing alongside the Dutchman wasn’t enough.

As for the price, there’s been talk that €80m could be enough, but that’s not the case as Napoli have made it clear they will not ‘devaluate’ their players this summer, with the asking price staying at around €100m.

Manchester United set to make ‘final proposal’ for signing – May...