With one week left for Porto to face Liverpool for the Champions League group stage, the Portuguese press already has some news on the squad that will be available.

Newspaper Record today has a piece saying the Dragons’ captain Pepe, who got subbed off in the first fixture against Atletico Madrid, should recover in time for that match.

The defender did not feature against Moreirense at the weekend due to the muscle injury on his left leg. He’s currently being managed by Porto’s health department, who’ll decide when he’s completely fit.

There’s a chance Pepe could feature against Gil Vicente on Friday, but the ‘absolute recovery’ is only confirmed for the game against Liverpool on Tuesday. 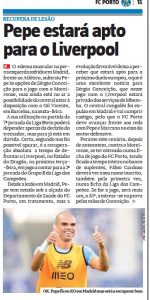 Since defender Chancel Mbemba got sent off in the game against Atletico Madrid, there was a chance Porto would face Liverpool without their two main central defenders.

Meanwhile, the Portuguese media highlights the injury of Thiago Alcantara, who’s set to miss the Reds’ next two games and is considered to be ‘doubtful’ for the trip to Portugal.