During the late 70s, Nottingham Forest enjoyed a lot of success in England and Europe, winning the title and also the European Cup and it was achieved when Brian Clough was in charge at City the Ground.

Unfortunately, things haven’t been great since the start of 2000 as they’ve failed to make it to the Premier League since they were relegated to the second division in 1999.

Aitor Karanka is in charge of the English club and he previously helped Middlesbrough return to the Premier League during the 2017/18 season, and there’s hope he can do similar at Forest.

Catalan newspaper Mundo Deportivo have interviewed the Spaniard and he explained expectations between the older and the younger fans are different since the former witnessed the club’s golden era.

“Forest fans are very good, but have their point of pride and it shows on a generational level,” he explained.

“The seniors, who lived through the golden era, are more demanding and the younger ones are more courageous because they did not live those golden times, which is why they do not compare.”

When  Karanka was also asked if Clough’s past success weighs a lot on him, he said: “It is a very proud club because it has a great history with those two European Cups, and wants to return to the Premier League. 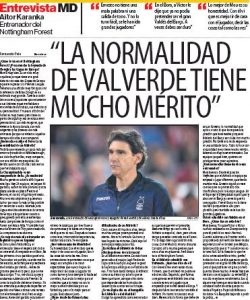 “We have very loyal fans and for me the reference of Brian Clough is a very big encouragement. I had the opportunity to meet players who were under his command and who told me wonderful things about his work, his methods and his personality.”