Home Premier League Chelsea Chelsea like player ‘a lot’ – Outline and ideas from summer transfers...
SHARE
Juventus have ‘good reason’ to believe they are among the favourites to sign Emerson Palmieri from Chelsea this summer.
That’s according to Tuttosport, who say the Chelsea left-back is looking at his options after a disappointing season at Stamford Bridge.
One of his options is Juventus, who have been interested in the Italian for ‘a long time’ and retain that interest with Maurizio Sarri, who worked with him in London, in charge.
Juve chief Fabio Paratici believes they are in ‘the front row’ when it comes to suitors and the newspaper speculates that a major swap deal could be negotiated between the two clubs. 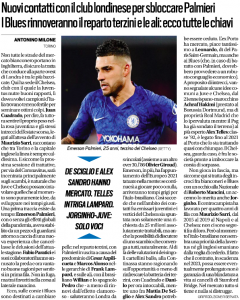 So far Chelsea have demanded €25m for their man, which could be ‘easily negotiated’ but there is also the possibility they will discuss a swap deal that ‘suits everyone’.
That would involve left-back Alex Sandro, who Juventus are considering selling and who Chelsea ‘like a lot’.
Thus a deal could be negotiated between the two clubs to swap the pair, although Chelsea would have to ‘make an economic adjustment’ as Juve value Sandro at a higher price than Emerson at this moment in time.