SportBild have two articles covering Timo Werner and Liverpool today. One in which they ask Julian Nagelsmann whether interest from the Reds is distracting the striker, and another in which they talk about efforts to get the transfer fee down.

The German magazine reiterate their claim that Jurgen Klopp has spoken to the RB Leipzig player, saying a conversation took place around Easter. It’s explained the Liverpool boss won’t make a signing unless he feels there’s enough of a connection there, so it’s important to hit it off.

After the conversation, the Premier League club didn’t go headfirst into transfer attempts. SportBild don’t think that’s because it didn’t go well, but rather than Klopp and his club are playing ‘transfer poker’ and trying to get the price down.

Werner has an exit clause of around €55m, and the option must be triggered before June 15th. Liverpool don’t want to pay this amount, according to the claims, so it’s assumed they’ll try and negotiate a cheaper price after that date. 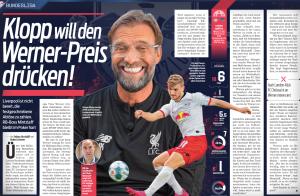 However, RB Leipzig have come out to say that won’t be happening. Club chief Oliver Mintzlaff is already on record as telling SportBild “He won’t get cheaper”, and it’s not thought the situation has changed despite the Covid-19 crisis.