Following Virgil van Dijk’s interview with Liverpool’s website this week, in which he stated he won’t be available for the Netherlands Euro 2020 squad, it was inevitable there’d be some reaction from the Dutch media.

Friday’s edition of De Telegraaf has a column which details the frustration over the defender not being able to join up, and sends some criticism towards Frank de Boer for not pushing the situation harder and sooner.

The Oranje manager is thought to have somewhat lost the media war to Jurgen Klopp, with the Reds boss and Liverpool sending out messages in recent months which managed to put huge doubt on Van Dijk’s availability.

It’s believed De Boer should have staged a similar media strategy, with the opposite opinion, because the defender would have been useful in the Dutch squad, even if he couldn’t play until the final stages of the competition. 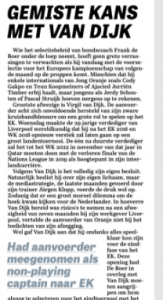 A large vocal presence within De Boer’s group, it’s felt Van Dijk could have still had influence even if it was unlikely he’d feature in the group stage.

Instead, the Dutch sat back as Klopp ‘increased the pressure’ on his player to sit the summer out, and that helped force the decision.