That’s what journalist Miguel Rico, writing for the last page of today’s edition of Mundo Deportivo is claiming and explains why ‘it is logical’ for the Reds boss.

Traoré came through the ranks of Barcelona’s youth system before moving to Aston Villa in 2015, after which he joined Middlesbrough a year later.

Wolves took him in 2018 and his development with the Wanderers has helped the 24-year-old make his debut with Spain earlier this month.

Rico is of the belief the wideman’s ‘talent may surprise’ those who have never seen him, but not those who worked with him at the Catalan club.

The journalist adds a Barca fan may wonder why a talent like Traoré, who came up through La Masia, is not at their club, more so when none of the current crop of attackers possess the same qualities as the Wolves star.

Rico states ‘Some, with other qualities, do not have the imbalance with which this boy 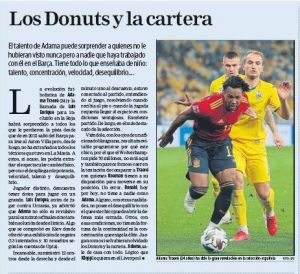 [Traoré] can open the most closed defence. Others, with these conditions, do not have the fortune of continuity or the concentration that the elite demands.’

Taking into account the Wolves’ attacker’s overall qualities and what he can offer, Mundo states ‘it is logical that Klopp wants him at Liverpool’.

Wolves, for their part, are ‘asking’ around €70m for Traoré.