Now it’s newspaper Correio da Manhã who brings an update on the player’s situation, as they claim his renewal has become a ‘priority’ for the Lions.

Even though he’s protected by a release clause of €45m and has a contract lasting until 2025, the Lisbon side are worried about the interest from other clubs following his good performances this season.

Club president Frederico Varandas, who’s also a doctor, has been busy working during the pandemic, but is set to start the negotiations for Mendes’ new contract along with his agent Miguel Pinho. 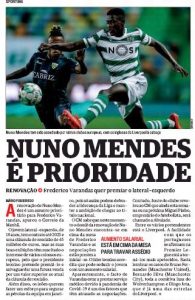 Regarding Liverpool, Correio da Manhã writes that the Reds are ‘one of the many pretenders’ for the signing.

The newspaper claims that the good adaptation of Portuguese players in the Premier League has been making them ‘more appetising’. They mention Bruno Fernandes, Bernardo Silva, several Wolves players and Diogo Jota.

Sporting’s concern with Nuno Mendes’ contract situation makes it clear that they see big potential in the 18-year-old. He was promoted to their first team this year, and only has 19 appearances for them so far.