Wolverhampton’s approach for the Brazilian defender Luisão seems to be very real. All the three biggest sports newspapers of Portugal are reporting it today, as Benfica see the transfer as a good option for the 35-year-old.

However, these outlets keep disagreeing when saying if the player is accepting the move or not, making the situation much more unpredictable than it seemed.

Just like they said on Tuesday, O Jogo keep claiming that Luisão has accepted the transfer. The financial offer would be the reason for him to say yes, besides the fact he only has one year of contract left in Portugal.

O Jogo also says that Benfica rejected a few approaches for him in the past, including a €5m bid from José Mourinho’s Chelsea last summer. Before the Portuguese manager moved to Manchester United, he’d come off a bad year at Chelsea, where there’d been some eyebrow raising defensive signings.

Despite leaving now, the player would be given a club role at Benfica after he retires.

Then there’s Record, who say Luisão still hasn’t given an answer. They claim he likes the idea of a move to Wolves, and that he’d get €2m per season, but hadn’t said yes by the time the newspaper was sent for printing.

Record says Benfica are selling him for a “symbolic value”. But as the deal is not done yet, Jorge Mendes would be looking for other options. 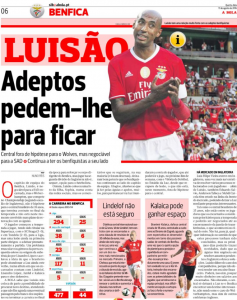 But A Bola has bad news for Wolverhampton fans. They claim that playing in the Championship is not an option for Luisao, who’d prefer a top flight club.

Other English sides are still said to be an option, as the defender is really not signing a new contract at Benfica and needs to find a new destination soon.

As Record won’t take a side, it will be funny to see this battle between O Jogo and A Bola here. Who’s right? Place your bets.

We’re just waiting for one of them to say Jose Mourinho wants Luisão again, this time at Manchester United.