Way back in March 2016, Correio da Manha were reporting that Jose Mourinho had been telling his old friends and associates in Portugal that he was set to become Manchester United manager.

A circus followed, with many claiming they got the news first, but Mourinho moving to Manchester United has been a scenario long known by his friends in Setubal.

Correio da Manha aren’t one of the most rumour hungry Portuguese newspapers, although they like to dip their toes as a transfer window approaches, and their Saturday edition has a big Manchester United story.

It’s claimed Jose Mourinho is prepared to sell David De Gea to Real Madrid for a huge €85m, and already has his replacement picked. The new goalkeeper, claim Correio de Manha, would be Ederson.

The 23 year old had enjoyed a great season with Benfica and been repeatedly linked with Manchester City, but Mourinho interest would be no surprise if De Gea is on the way out. 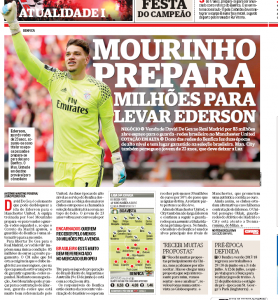 As is often said in the Portuguese press, Benfica want €30m for their 50% share of the player’s registration. Rio Ave, Ederson’s former club, own the other 50%, and turned down €5m from Benfica recently for their share.

That offer was described as insulting, but the two clubs will have to find a solution, because nobody is likely to pay Ederson’s €60m release clause, and it’s understandable Benfica feel they should get around €30m.