Home Europe Jorge Menges favour may be required so Wolves can get deal over...
SHARE

Another week has passed, and apparently no deal has been found between Sporting and Wolverhampton Wanderers for the transfer of Rui Patrício.

The Portuguese press continues to be pretty optimistic that there will be an agreement soon, but the Lions are fighting hard to get everything they can.

And according to a story from O Jogo today, it seems that agent Jorge Mendes will have to help Wolverhampton a little bit.

Sporting have a €7m debt with the super agent, which dates back to 2012, when Adrien Silva signed a new contract for the club.

The Lisbon side were supposed to pay Mendes in the next big deal he’d intermediate. That was agreed when the clubs had a €18m deal for Patrício earlier this year.

But the Alcochete attacks happened, the goalkeeper left for free, president Bruno de Carvalho was voted out, and everything changed. 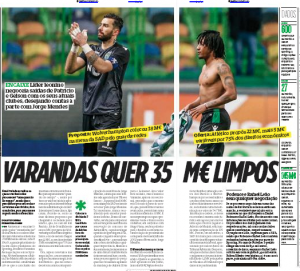 So now Sporting have decided they want to make €35m clear with the sales of Patrício and Gelson Martins.

So in case Wolverhampton don’t increase their initial offer, Jorge Mendes will have to give up on his money for now, and wait for another opportunity.