Jonny Otto potentially turning his loan to Wolves into a permanent transfer is a story which has grown to such a point in Spain that AS now present it as a done deal.

In their Sunday edition, the Spanish newspaper report the fullback ‘will be’ transferred to the Premier League on a permanent basis.

There are no ifs and buts and they don’t present it as a rumour.

It’s explained that after signing the player for €7m plus bonuses from Celta Vigo, Atletico Madrid loaned him to Wolves with the expectation of bringing him back in the summer.

However, financial pressures at the club have changed everything and now they’re happy for a January deal.

Here’s the intriguing bit: AS say that Wolves ‘execute the purchase option’.

It had been thought there was no option, 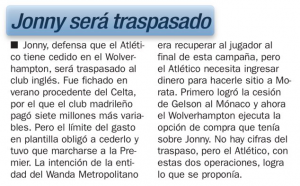 that’s what was made clear at the time of the loan, and Jonny himself spoke repeatedly about returning.

AS go on to say there’s ‘no figures’ been released for the deal.