For the past few days we’ve been covering a building story from Spain about Jonny Otto making a permanent move to Wolves.

The Spanish international is on loan for the season, and has made it clear several times that his intention has always been to return to Atletico and that’s why he signed for them.

On Sunday, a couple of Spanish newspapers treated the transfer as done, agreed, there was even a claim Wolves had used a clause to make the permanent switch happen.

Despite the claims being so sure, there hadn’t been any figures mentioned.

AS changes that on Monday, but it’s still not completely clear.

It’s once again stated Atletico paid Celta Vigo around €7m for Jonny last summer, and this is where it gets complicated.

Atletico have signed Alvaro Morata on loan until summer 2020, and AS report: ‘Chelsea signed Morata in the summer of 2017 for five seasons in exchange for €65m plus €13m in variables. The striker has already had a campaign at Chelsea and was halfway through 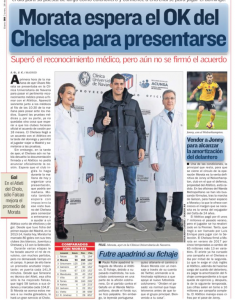 the second. What the English club requires of Atletico, in addition to taking charge of the salary of the striker, is paying the amortisation of the signing for the remainder of the year and then the next season. The figures come out around €16m per full campaign.’

So for one and a half campaigns that would be around €24m.

AS then say Atletico are covering this with Jonny’s permanent exit.

Yet again, there’s absolutely nothing published on what the fullback thinks about it all.