It ‘seems inevitable’ that Donny van de Beek will leave Manchester United this month, with Everton, Newcastle United and Wolverhampton Wanderers all holding talks about him in recent months.

That’s according to Algemeen Dagblad, who cover the midfielder’s situation today and the tricky agent tussle that is making it difficult for him to leave Old Trafford.

AD explain that Van de Beek’s situation at Manchester United has got ‘more and more hopeless’ with him failing to establish himself under Ralf Rangnick since his arrival.

He remains on the periphery at Old Trafford, but a move away is not yet a done deal because he is ‘caught between conflicting interests’.

While it ‘seems inevitable’ he will go before this month ends, and there is interest in him in the Premier League, a deal is not an easy thing to secure.

Everton, who desperately need a central midfielder brought to Goodison Park, have shown an interest, as have Newcastle United, with Eddie Howe looking to spend their money wherever they can.

Wolves are also in the picture, with them flying high in the Premier League and keen to keep building, particularly amid growing interest in Ruben Neves. There’s also been claims regarding Moutinho’s future at Wolves this week.

Van de Beek, though, is in a ‘complex position’ thanks to a fight between two agents for him making things difficult.

AD explain that after his former agent Guido Albers failed to secure an exit from Manchester United in the summer, the midfielder elected to change agent and go with Ali Dursun, who manages Frenkie de Jong, Victor Lindelof and others.

However, he’s still ‘under contract’ with Albers until July 1st, meaning that the commission from any deal he makes has to go to Albers, not Dursun. That will only change in the summer. 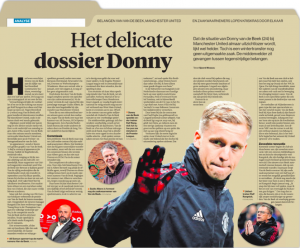 Thus, matters are complicated as Albers is still officially his agent but Dursun and his colleague Kenan Mert are the ones operating on the market for the player.

Yet, if Van de Beek were to move to any of the interested parties such as Everton, Newcastle or Wolves, it would be Albers who receives the commission. Attempts to tear up his deal have come to nothing so far.

Then there is Manchester United to consider, with AD saying they’re putting up roadblocks too as they do ‘not necessarily see the need’ to let Van de Beek go on a temporary basis.

He’s a useful player to have around as back up, and his behaviour off the pitch is ‘exemplary’, so there’s no issue there either.

While a loan deal is the ‘logical option’ for the player, it isn’t for United and so that, coupled with the agent wrangle, means finalising any move this month is a difficult task for all involved.

Newcastle, Everton and Wolves will have to work a bit harder.