Portuguese newspaper O Jogo features today a pretty long interview with André Silva, who seems to have found himself at Eintracht Frankfurt this season.

With 20 goals and five assists in 23 games, the striker’s form has been impressive, and that’s why he’s been linked to the likes of Atlético Madrid and Manchester United lately.

So when speaking to the player today, O Jogo quizzed him if he’s been getting approaches from any other clubs, recalling the links with the Colchoneros and the Red Devils in January.

“I’ve heard rumours, but that is it. Rumours are rumours… At the end of this season, it’s something that gives me more motivation to work, it’s a sign that what I have accomplished has borne fruit and the path has been good”, André Silva told O Jogo. 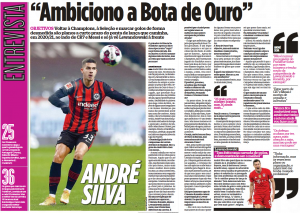 Then they asked him how much is he worth in the current transfer market.

They wanted to hear that again, and he claimed he was joking.

“[laughs] I’m kidding. I think I heard 30 and something somewhere… when we sell our merchandise, we always increase the value a little bit [laughs]. Things are as they are and, whatever happens around us, the most important thing is to look at me and what I can do.”

Besides the January rumours, many stories linking André Silva to Manchester United have been coming from the English press for the past couple of weeks.

It’s been claimed that Eintracht Frankfurt would be interested in letting the striker go for around £30m, with a little help of Jorge Mendes to get the deal done.