West Ham officials are set to arrive in Rome today, according to Il Messeggero, to continue their Felipe Anderson chase.

It’s stated the Hammers’ first offer was €30m, including bonuses, which was quickly rejected. The representatives arrive with a new offer of €35m with bonuses and it’s unsure what will happen now.

Lazio have wanted €45m as their asking price and the Italian newspaper says the club doesn’t intend to go below €40m for a player they consider to be a ‘jewel’.

The club aren’t keen to part ways, but with the player keen on a move it’s considered a possibility, with Lazio determined to do things on their terms. 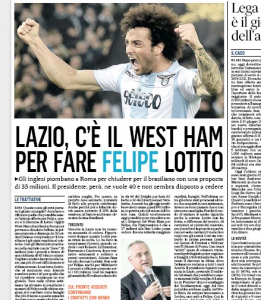 Of the transfer fee, 25% goes to Santos, Anderson’s previous club, so that’s a factor in the Serie A side’s thinking.

Jordan Lukaku’s future is also up in the air, with interest from Southampton, and West Ham, claimed.