Home Europe From Italy: Man United could try a loan with obligation to buy...
SHARE

You know we’re nearing the end of the transfer window when all the crazy stories start rearing their ugly heads again, and there are none more foul than Sergej Milinkovic-Savic’s potential move to England.

Prior to the World Cup, the number of articles concerning the Serbian’s future was high, and we witnessed some sort of crash during and after the competition, mostly because the 23-year-old was on holiday.

But, with José Mourinho constantly complaining about his lack of new signings at Manchester United and the unoriginal stories sending Paul Pogba to Barcelona, it was inevitable that SMS (that’s what we call him now because we know him so well) would make a late and flashy appearance.

We’ll start off with Il Messaggero’s version of events, which isn’t exactly groundbreaking, who claim the Lazio star will be the Red Devils’ option should the France international leave Old Trafford in the coming days, and good old Jorge Mendes could help them get the deal over the line, acting as an intermediary. 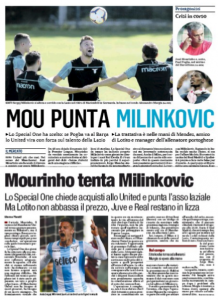 See? It’s just key words plucked together and shoved into an article because it gets the people going.

Il Tempo, however, have a far more original version, sprinkling some flair in their article, because they don’t mention Pogba once.

Instead, they reckon Mourinho’s tantrums could lead Manchester United to improvise, and while they wouldn’t give Lazio all the money they want straight away, they don’t exclude the possibility of Ed Woodward try the loan with an obligation to buy option.

In order to pull that off, Il Tempo reckon the up front fee would need to be at least €30m, with the rest coming next season, taking the whole deal to a nine figure sum (€100m or more).

We always praise originality at Sport Witness, so, bravo.

We’ll start believing these when someone makes a move, because we’ve seen enough of them to take them with a pinch of salt for the time being.