Wednesday marked the beginning of the end of the Walter Mazzarri era, if you want to call it an era, at Watford.

The Italian manager, after a meeting with the club’s board, agreed to step down from the role at the end of the season, and the hunt for his successor is already underway, with Marco Silva the frontrunner, even if the Portuguese media don’t think he’ll take it.

Before we get to Marco Silva, it’s worth pointing out a few things.

A lot was made prior to Mazzarri’s sacking about his use of the English language in the job, and his use of an interpreter during press conferences and interviews with the local press.

John Cross, the Daily Mirror’s Chief Football Writer, even went as far as labelling the Italian manager as ‘an insult to the Premier League’ and accused him of ‘not bothering’ to learn English, when, in fact, that wasn’t the case.

This has been picked up on Thursday by Gazzetta dello Sport, who don’t name Mr Cross, but do mention the ‘insult’ labelling by ‘an English journalist’, and try and clear the air a little bit on what happened at Watford. 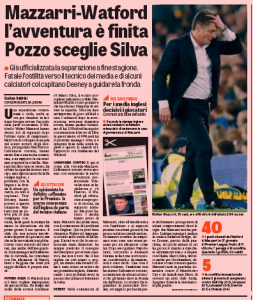 Describing the ‘sacking’ as a ‘consensual and civil separation’, the Italian newspaper explain the meeting took a grand total of 30 minutes, after which both parties agreed it was wiser to each go their separate ways.

Gazzetta state that while Watford gave him the platform he wanted, he never quite managed to integrate as well as he wanted to in his surrounding environment, which happens.

Not everyone will be able to make England their home in just under a year, regardless of how hard they try.

As for his ‘efforts’ to do so, it’s worth pointing out Mazzarri did everything he could and was ‘deeply involved in studying the language’.

His decision to use an interpreter? ‘To avoid misunderstandings’, which, considering how scrutinising and ruthless the English media is, is understandable.

Gazzetta even take a small pop at Mr Cross, saying the Mirror chief football writer ‘forgets the known problems British football players had in Italy in the past’ when it came to adapting to a different culture.

As for the reported problems Mazzarri had with some of the players at his disposal, they claim Troy Deeney was ‘overweight for a good part of the year’, and that the manager ‘had some issues with his behaviour off the pitch’.

Returning to Marco Silva, Gazzetta state he is by far the favourite for the job, and that Watford have been ‘closely following his job these past few months’, especially impressed by how well he integrated in England, which will help him to settle in to Watford’s environment.

They even go as far as saying he will ’99% be their new manager’ next season.

Considering Watford’s owners are Italian, and so was their soon-to-be ex-manager, it’s always worth listening to what one of the country’s top newspapers has to say when it comes to these stories.

Every side will have their own version of the story, but, at least, the Italians, usually known for their colourful use of their language, didn’t resort to insults.