In Germany it’s reported Keita is moving to Liverpool in the summer for €75m, higher than some English figures, and Bild state for €20m more he can go in January.

The German newspaper say ‘internally it’s clear’ at RB Leipzig that Keita can go if Jurgen Klopp gets Liverpool to stump up €95m in total. Bild explain that despite putting on a public show of strength over Keita ‘the internal truth looks very different’.

Throughout their article, Bild reiterate that Keita can go for an extra €20m, with one line saying: ‘BILD knows: If the English offer €20m more, in total €95m, Leipzig agrees to a change!’

The ‘opinion has changed’ in Leipzig because, more or less, they’re fed up of the player, with Bild saying: ‘The extravagances of the African are now getting on people’s nerves.’ 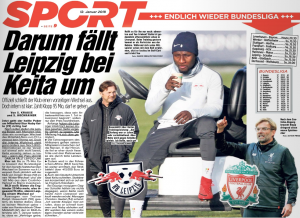 There’s the driving license mini scandal, and Keita has also packed up learning German to learn English instead.

This all fits in with other claims from Bild and Kicker this week that RB Leipzig are ready to play ‘poker’ with Liverpool over an early move.