All of a sudden, Liverpool’s asking price for Coutinho has become €160m, report AS in their Friday edition.

It’s worth mentioning AS are more a Madrid based newspaper and yesterday we covered an article from them pretty much mocking Barcelona’s transfer attempts and how it so often ends up dramatic.

AS explained Barcelona are like ‘someone who goes to the supermarket and pays with a pile of pennies, leaving huge queues’.

So on Friday, AS claim Liverpool’s asking price is now €160m, a jump of €10m. The newspaper then go on to state, at some length, there’s lots of indecision at Barcelona.

Sure, everyone at Barcelona wants to sign Coutinho from Liverpool, but the price is putting some off. There’s an ‘internal debate’ currently going on. 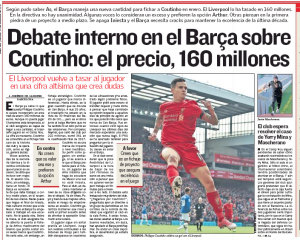 If all of this is true and FSG have upped it by €10m then it’d be a nice bonus, and not entirely unreasonable in the current market.

Should AS Monaco be looking at €100m or more for Thomas Lemar, then €160m sounds about right for Coutinho, especially if Liverpool would allow Barcelona to spread the payments.

Or maybe FSG are just winding Barcelona up, which we’d fully get behind.