Two days ago, the midfielder told El Chiringuito in Spain he is unaware of what will happen to his future after his loan spell with the Gunners.

Marca reported last month that the 23-year-old will not be short of options, if he decides to change clubs in the summer. However, they didn’t specify which clubs are keen on taking him for next season.

The Spain international enjoyed a good start to this campaign at the Emirates, but an injury, coupled with Unai Emery’s sacking, led to the player having a limited role with the Premier League side.

Friday’s edition of AS claims that having an ‘intermittent role’ at the north London club has convinced Ceballos to find a new club that will offer him an opportunity to feature regularly. 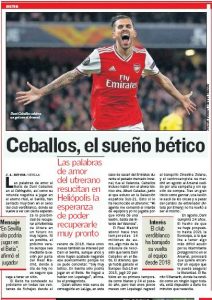 This is important for the Real Madrid owned player, if he wants to retain hope of making it to next summer’s European championship with La Roja.

Prior to joining Real Madrid, Ceballos impressed at Real Betis and AS now claims the latter are ‘ready to give him the minutes he needs’. They could try taking Ceballos on a loan deal in the summer.