Tottenham Hotspur were interested in signing Malcom before he moved to Barcelona from Bordeaux in 2018.

The 23-year-old’s move to the Camp Nou created a lot of noise back then after the La Liga side managed to beat AS Roma for his signing. The Serie A side came close to acquiring the winger’s services.

Barcelona paid €41m plus bonuses to the Ligue 1 club for signing Malcom.

They state Barca ‘drew up an intermediation contract with Minguella to negotiate, on behalf of the club, to incorporate Malcom, in exchange for an amount close to €10m’.

This has been relayed in today’s Mundo Deportivo and the newspaper also contacted Minguella Jr after Cadena Ser came out with their own report on the Malcom deal.

Minguella Jr says his ‘real commission’ was “just over one million euro”. When discussing the details, Spurs get a mention and the intermediary also reveals the proposal made by Tottenham.

“Barça hired me to make possible an operation that initially cost about €62m, which was the offer that Bordeaux had from Tottenham, and we managed to get him to stop going to Roma, get off the plane and change course to Barcelona,” Minguella Jr said.

“The operation was closed for €41m plus the 8 of intermediation that could make this operation possible.”

“With this operation, Barça saved about €15m and had a player, who was later sold for €50m plus bonuses, earning money. Almost everything that Barça paid me was for the commitments they had signed.” 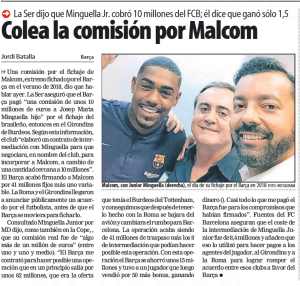 Sources from Barca told MD Minguella Jr’s intermediation cost them €8.4m and this was ‘used to make payments to the player’s agents, Girondins and Roma to break the agreement between those clubs in favour of Barça’.