Already on the radar of many Premier League clubs when he was at Lille, Monaco or even Bordeaux, Soualiho Meïté has blossomed even more in Italy at Torino.

The midfielder, while not always in the starting line up, has become an important part of the Serie A side, who are fully aware of the interest in him, and there will come a time when they will have to listen to the offers arriving from ‘half of Europe’, including England.

Gazzetta dello Sport have an article on the 26-year-old on Thursday, and they explain two clubs, Crystal Palace and Southampton, have already started making moves for the player.

They state Torino have been the subject of the ‘start of an approach’ from England, with a ‘couple of intermediaries’ testing the waters to ‘pave the way’ for a potential negotiation in the summer months.

Out of all the clubs, it’s ‘especially Crystal Palace and Southampton’, two cubs who have ‘followed the player’s growth over the past year’, but they aren’t the favourites. 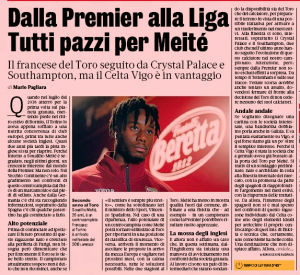 No, that position is reserved to Celta Vigo, who already knocked on Torino’s door in January for Meïté, doing preliminary enquiries with the promise of returning in the summer.

That puts them ‘in the lead’, according to the Italian newspaper, meaning Crystal Palace and Southampton might need to be convincing in their arguments if they wish to get the former France U20 international.

Over to you, Roy Hodgson and Ralph Hasenhüttl.