Manchester City striker Gabriel Jesus continues to be one of Tuttosport’s favourites, as the player is once again highlighted by the Italian newspaper today.

With Juventus now looking to add a centre-forward to the squad, the club are said to have two players on top of their list. The first of them is Santos wonderkid Kaio Jorge.

His contract with the Brazilian giants expires in December, so there’s the chance of signing him for free or for a very low price, despite competition from Benfica and Milan.

But there’s another possibility on the table, which is the departure of Cristiano Ronaldo. Even though Pavel Nedved already claimed the Portuguese star is staying at Juve, Tuttosport insists that he could end up at PSG if the Ligue 1 side lose Kylian Mbappe. 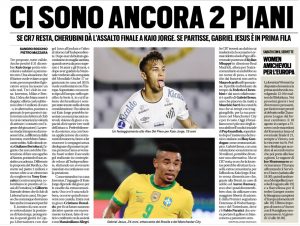 That’s the domino effect that would convince Juventus to make a bigger investment and go for Gabriel Jesus.

The club have been interested in the Manchester City player for years, but now it’s claimed that the signing would be more realistic since he’s no longer considered ‘untouchable’ in Pep Guardiola’s squad.

It’s said Jesus’s price was decreased to €50m, and that makes him an affordable alternative on Juventus’ table.