Two days ago, we relayed news from Spain that Atlético Madrid have received an offer from Newcastle United for the transfer of Álvaro Morata in the winter market.

The Magpies are not the only club credited with an interest in the striker, who is currently on loan at Juventus. They are joined by Tottenham Hotspur and Arsenal. Mikel Arteta’s side are thrown into the mix along with the other two English clubs and Barcelona.

Sport on Sunday claims the 29-year-old was keen on making a switch to the Camp Nou and his agent had reached an agreement with the Catalan club over personal terms.

Morata did everything to join Xavi Hernández’s side, but it was difficult for Barca to reach an agreement with all parties involved, especially the La Liga winners. Juve, for their part, were ready to ‘open’ the exit door, after signing Dušan Vlahović from Fiorentina.

It’s claimed Barcelona have given up on signing the Spain international, while he has received ‘interest’ from the Newcastle, Arsenal and Spurs. 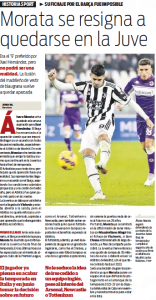 Sport state the Premier League trio would have looked at taking the frontman on a loan deal until the end of the season, but it has not convinced the Spaniard. The temporary move would also not benefit Atlético.

Morata was at Chelsea between 2017 and 2020. After having struggled with the Blues, the player is now ‘not seduced’ with the idea of going back to the Premier League.