Liverpool interest in Keylor Navas is building in the Spanish media.

On Thursday we covered claims from El Confidencial that Jurgen Klopp has an ‘obsession’ with the goalkeeper and trying to sign him, pushing Liverpool’s supposed interest.

Interest was said to have been made known several times, but Navas isn’t interested in leaving Real Madrid even if they bring in a new goalkeeper, as the Spanish club are expected to do.

Friday’s edition of Sport covers similar claims, without giving credit to El Confidencial or mentioning any other claims, it’s presented as their own information.

The second source also covers a desire from Navas to remain where he is and see out his contract until June 2020.

Liverpool are again said to be interested in signing the 31 year old, along with Sevilla, but 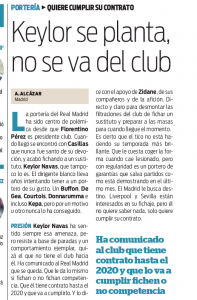 right now the player’s mindset is to continue in Madrid.

Should the claims be true then Navas may have a rethink if Madrid’s plan to bring in a Galactico goalkeeper eventually comes to fruition.

There’s a possibility Liverpool are being used as a prop in all of this, to show Navas is so keen to stay he’d even knock back the chance of a move to Anfield.