Raphael Varane’s future is now being covered daily by the Spanish sport media on a daily basis, and there’s a genuine feeling this could be the summer he leaves Real Madrid.

The club have been trying to get the Frenchman to sign a renewal for some time, but his camp have largely been ignoring their attempts. With a contract expiring a year from now, it’s been made clear that should the defender not commit to a new deal soon then he’ll be placed on the market.

Sunday’s edition of AS reiterates that Manchester United are one of the ‘strongest options’ for the player’s future, and the Red Devils are the only club named in the report.

The Spanish newspaper cover claims from England that some kind of ‘barter’ deal involving Paul Pogba could see a transfer built, with the two France internationals swapping clubs. 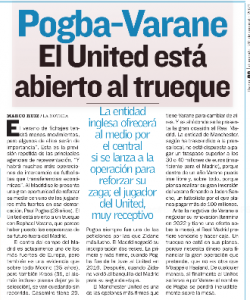 AS say it was ‘inevitable’ Pogba would be pulled into the mix, yet they make it clear that it’s unlikely Madrid would be interested in such a scenario. The midfielder isn’t one of the big signings Los Blancos are dreaming of, with those being Erling Haaland and Kylian Mbappe.

Therefore, give Varane’s ‘refusal to negotiate a renewal’, Madrid would prefer to sell in a straight transfer and take the cash.

A barter deal with Manchester United involving Pogba isn’t in their plans right now, according to the report.